Finally, DevEx is using its vast jobs database to share some great insights into the global development jobs market.

It’s one thing to have a hunch about trends, it’s another to… have specific numbers. For instance, Midlevel jobs dominate the opportunities for the last 3 years in a row — with over 40,000 Midlevel appointments advertised in 2021. 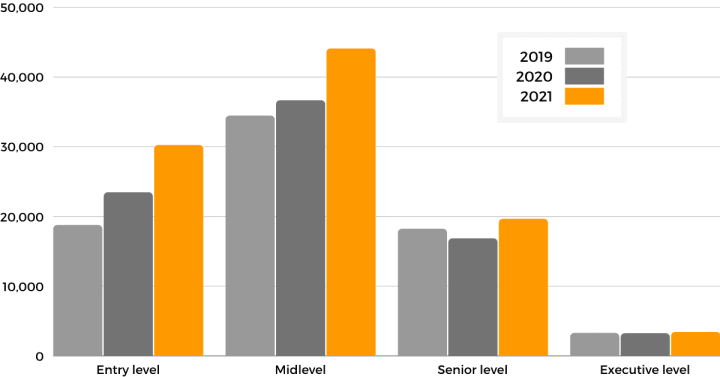 The total number of opportunities per job level in each of the last three years.

Recently, I came across Rawan Taha on LinkedIn. In fact, 5 of my professional connections were ALREADY following her. Serious people, so I was immediately intrigued.

Taha works for a global NGO, and was until recently a UNDP-African Union Young Women Leaders Fellow.

She’s young, brings a fresh edge to sharing about her development career journey, and has amassed a huge following: nearly 7,000 followers on LinkedIn.

It’s great to see young professionals make use of social media in a way that gives them an outlet to share their experiences with others. (It’s something I was always a bit too afraid to do as an international civil servant early in my career, so it’s really motivating to see this.)

Check out her profile — and it looks like she is putting out a book project on how she won international employment pretty soon. Sounds promising.

I currently live in Atlanta, United States — known as the American Deep South. This past weekend, it snowed about 1.5 inches (4 cm or so) across the metro area.

The last time it snowed this much, in 2014, it was called Snowmageddon (Snow + Armageddon!). Just two inches of snow paralyzed this city of 6 million people. 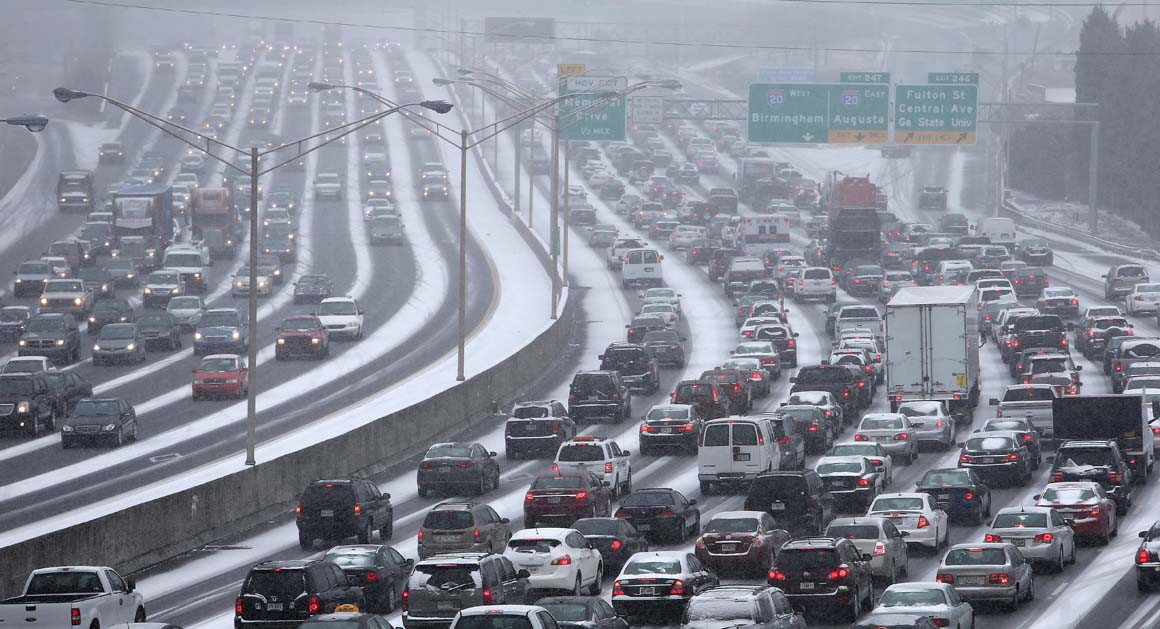 The entire government, transport, health and business infrastructure—all shut down. More than 2,000 children were left over night at schools because their families just couldn’t get to pick them up. Thousands were stuck in their freezing cars for days on the highways when everyone was told to evacuate the city at once.

Beyond the weather – a huge point that emerged as to WHY the city was paralyzed by so little snow and ice, was the Atlanta metro area’s local governance system. More than 60 mayors, across at least two dozen counties, had a huge task of coordinating operations and response to the snow. They failed.

But lessons were learned. And this year, we were much better prepared, at least where we live, thankfully with no major power outages or other troubles.

Instead of stuck children and cars, the highlight picture for me was this puppy who just wanted to play in the snow: 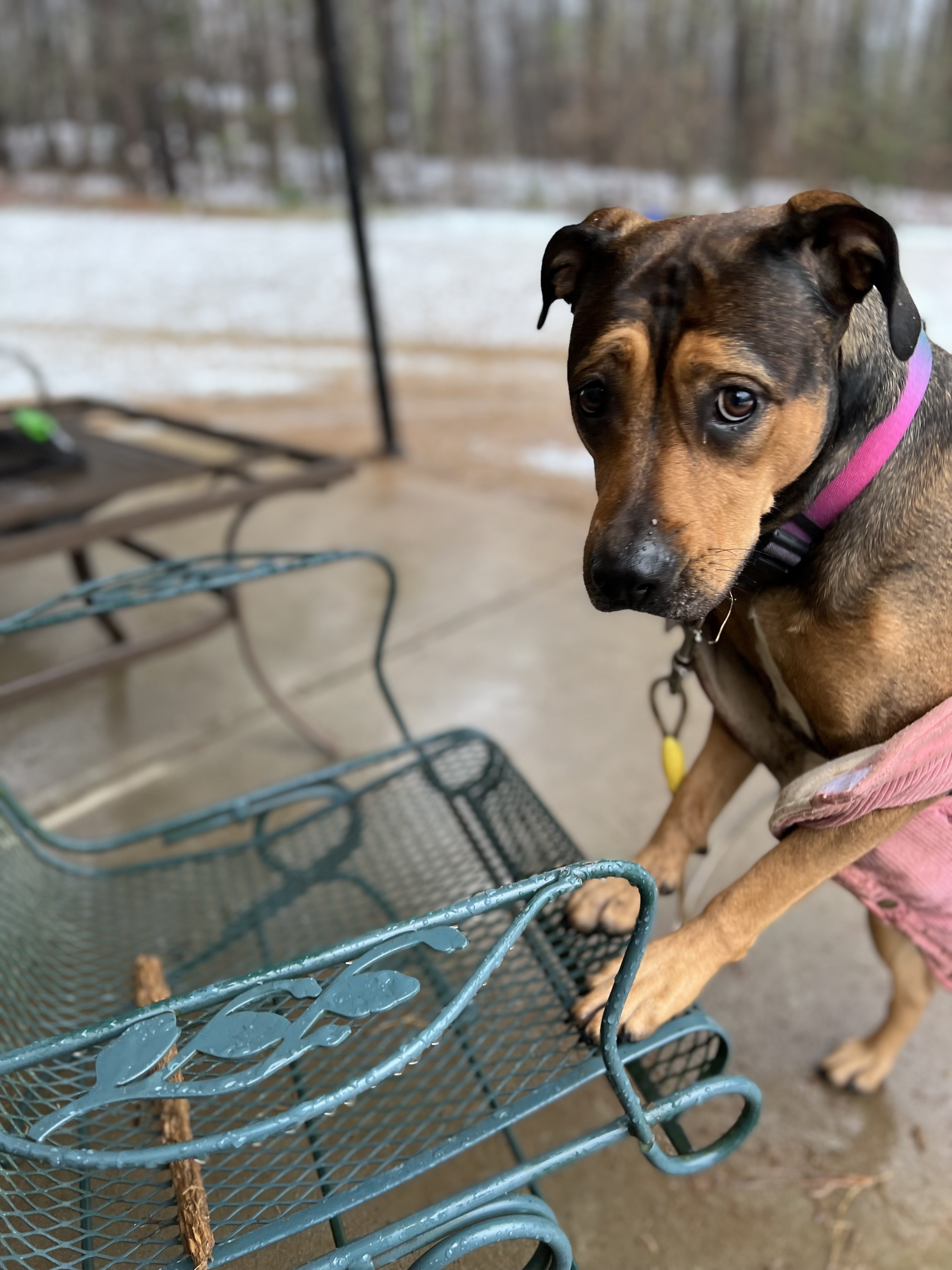 I will share more soon about my 2022 impact strategy. But a key component is finding as much work as I can in the early part of this year.

So far, I’ve reached out to a half-dozen former colleagues, and applied to 5 consulting assignments this year. That pace would put me on track for the highest number of jobs applied to in a year in roughly a decade.

I’m excited to take action and frontload all this work to meet my goals for this year. What steps are you taking to reach your goals?

Another major goal for me is to get back to reading. Early in my career, I read EVERYTHING.

I spent all day reading UN reports, academic studies, and scouring the latest statistics databases as part of my work.

I subscribed to all the major journals and magazines, constantly staying in the know about international affairs, economics and all the debates around the world.

And in my “free” time, I read the latest books by development scholars, the bestsellers in current affairs, and any book recommended by friends and colleagues.

In recent years, though, I found myself reading too much NEWS. This keeps me up to date on facts and what’s happening. But without enough on context and what it all means.

So I’ve started READING a lot more. While I don’t think I will quite find the time and energy to read as voraciously as I did when younger, here is my current reading list:

I won’t make a goal of reading 100 books or anything like that. I’m satisfied with picking up a book every day and squeezing in as much reading as I can in between work and life.

If you’re interested in global development, a name you should already know is that of Jeffrey Sachs.

He featured in a podcast I found this week, by Dan Banik, an academic studying the SDGs. And apparently doing some solid podcasting work.

Sachs has long been a proponent of international action for achieving a world of zero poverty, in policy and planning of the Millennium Villages, and in making a case for environmental change.

In this latest podcast, Sachs argues that the world needs a “different system of global development.” You should take a listen to see what you think of it yourself.

My thought this week is:

With a 40 plus year career at Harvard, Columbia and in various UN advisory roles, Sachs has unquestionably been a major player in many of the key moments leading to today’s global development agenda. You could even say, Sachs is an architect of the system of global development that he now argues must change.

So, how do you change a system you have spent a lifetime building?

Hope you enjoyed these few ideas this week, have a great weekend!

This site uses Akismet to reduce spam. Learn how your comment data is processed.

Get insider secrets to a fast-growing career.